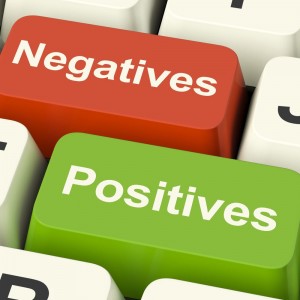 This means people will work twice as hard to stop losses than achieve gains.

Research led by Princeton Nobel Prize Winning Psychologist Daniel Kahneman reveals that someone who loses $100 will lose more satisfaction than another person will gain satisfaction from a $100 windfall. This is why the use of trial periods and rebates works so well in retail. A trial period takes advantage of a buyer’s tendency to value a good more after she’s using it and it’s part of her status quo.

This means that whether your next call-to-action: donation, advocacy alert, petition, sharing, or volunteer recruitment, is framed as a loss or as a gain is a very important distinction.

Does this mean that urgency, threat of disaster, threat of what might happen if your donors don’t donate, works better than sharing all the good stuff that will happen when your donors support your mission? Maybe.

Most important to remember is that negative frames often work in the short term as attention-getters and mobilizers. However, persistent negative frames ultimately hurt you as a long term approach because you sound like “Debbie Downer” and readers or subscribers eventually tune you out and even avoid you because you’re … well … depressing.

Negative frames work, but test them and use sparingly.

You are brilliant. Start sounding like it with these power words.

No Bulls&#! Guide to Emails that Convert (even if you hate writing)

How to write a perfectly persuasive email that converts into revenue

Get more leads to register for your webinars, show up live, and buy with these perfectly persuasive emails